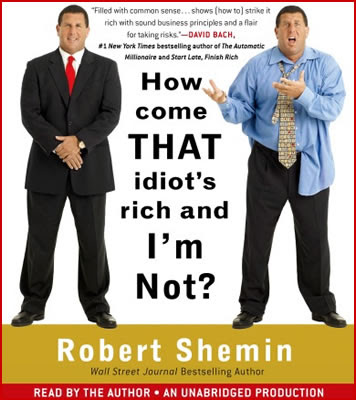 Yesterday I “got lost” in a bookstore, when a book from the upper shelf caught my sight – “How Come This Idiot Is Rich and I’m Not?”, by Robin Shemin. I spent about five minutes, holding the book, fighting with myself, like a woman on a diet, trying to fight her chocolate cravings. But because I already bought a couple books, I decided that I will first read them, and then come back and buy this one.

Even though, the headline of the book, somehow occupied my mind and I decided to write my own version of “How Come This Idiot Is Successful and I’m Not?” and later on, when I buy the book I will see how it is gonna influence my point of view.

So here is how I see it. There are two reasons “why this idiot is successful and I’m not”!

1.Both have great ideas. The only difference is that successful people dare to take the risk, and the rest just live with their unrealized ideas!

Every day a lot of thought go through my mind. I am constantly thinking over ideas about articles, workouts, projects, recipes or something else. I bet that the same happens in your own mind.

At times it is astonishing how we are trying to self- convince ourselves that we are not worth, what we wish for. Why are we doing this? Probably it is fear, probably it is insecurity or we are just used to our monotonous day and no matter how much we claim we want change, we’d rather stay in the secure place, than take the risk…

And success is an idea-> an action to make it happen-> persistence to cope with obstacles that get in your way-> the capability to be flexible and react according to the situation, not the plan!

In two days, it will be one year since I started coaching the group workouts “Workouts for machines”. I had this idea, for about an year, but I never dared to try. I always find a reason why it is not the right moment. And one day, I just decided that if I don’t start today, I will always postpone it for tomorrow and I will be always standing in one place. Thus the workouts began. At the first training session there were just 3 people. Was I disappointed? No! Because I knew that what I wanted to achieve takes time, a lot of hard work and persistence. Back then we had three workouts a week, and just three people came. Today, a year later, we workout 5 times a week and the groups consist of 8-14 people.

I took the risk to be disappointed by failure and today I have the opportunity to do something I love, to work with really motivated, positive and ambitious people… and my dreams do not stop here! But I already know that no matter what idea is running through my mind, I have to take the risk, make an action and make it come true!

How often do you get disappointed by failure? I will tell you that there is nothing wrong with being disappointed! It is absolutely natural! But how often do you ask yourself, when you made a mistake, try to search for it, fix it, take a lesson and keep striving for your goal?

My observations show me that when a person fails, he is more likely to look for the reason in some mighty forces, that are trying to give him a sign, that this is not the place for him. People look for the reason behind failure, in some negative energy, coming from evil and jealous people, that surround us…

But keep in mind that nothing and nobody has the force to rule the direction of your life, besides YOU! It is said that the life of a person is like a ship, in a gale, which is steered by you. It is up to you where you will head the sails. If you let the wind blow you in a random direction, then you will be wandering forever and you will stay miserable. But if you get yourself together, if you give your all to turn the sails in a direction that will let the ship( your life) to sail in the direction you were headed, then you will be happy and satisfied!

Failure is not fatal. Failure doesn’t mean the end! Failure is just a step back, that will give speed you up to make two steps forward!

So if you wonder “how come that idiot is successful and I’m not”… probably he made his idea a reality, he took the risk and didn’t quit when failure came!

Are you ready to be successful?

Everything That I Would Want You to Know about Me!

This Post Has Nothing to Do with You! But Everything Written Inside Concerns You!

A Guide to Successful Relationship with Girls Who Lift Weights