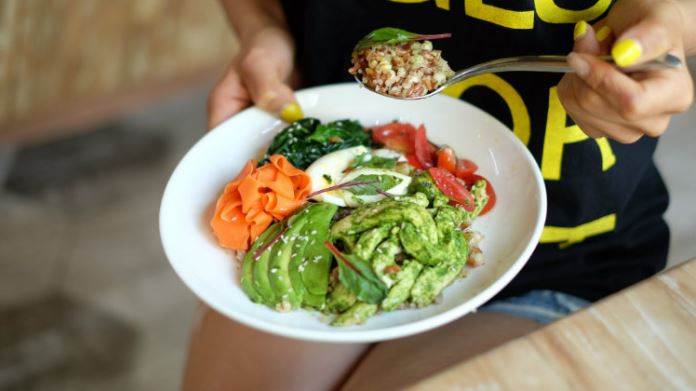 Change in diet and lifestyle – what makes it so difficult? Is it just our decision and attitude or are there other things that are stopping us? Over the years my observations have shown that one of the main reasons most people can’t finish what they started is their environment – first and foremost the people around them. In fact, when a person changes, a natural consequence of that is that some people drop out of our lives, others protest for a while and then accept our new selves, and others still – they just come into our lives as a result of who we become when we assert ourselves and our choice.

You have no idea how often I get messages from people I work with, asking me how to deal with the fact that their better half does not accept their new way of life; that their mom always prepares their favorite unhealthy foods and serves them on purpose; that their friends protest they don’t go out with them every night, because they schedule workouts on some days of the week.

If you find yourselves in a similar situation, you should know you are not the only ones – we all go through this. The only way to deal with this situation and not let it make us give up on our goals for a healthier and more active way of life is to take a mindful look at what is going on. What does this mean?

Here you must understand that people don’t see us the way we actually are – they live with the idea they have about us. This is very true of our relatives as well. Quite often people keep a memory of us and base their present treatment of us on that memory. For example your grandma who remembers that when you were 16, you refused to eat oatmeal with honey, fruit and nuts, and even though you tell her that this is what you are going to eat today, she still makes donuts. This is a trivial example, but you can think of many cases like this, where the people around you have a “frozen” idea of who you are, what you like, what you want and they don’t seem to notice the change you have been through over the years.

So when you decide to change something about yourselves, apart from putting in the effort it takes to deal with your own habits, you will also need time to deal with the idea that the people around you have of you. They will need time to get used to your new identity. There are two reasons for this – one is that when you change, people become afraid – they fear that this change may take you away from them. It takes courage in the relationship, so that both sides can grow simultaneously.

2.Our positive change increases other people’s fear that they are not enough

The other reason is that quite often some people who are close to us don’t seem to be ready for this change and are not willing to bring it into their lives. Seeing you change takes them off guard and forces them to see through the illusion that “this is what everyone does” and that “it’s not that they don’t want to, but it’s just that this is what happens when you get older” and all excuses of this kind. Yes, the truth hurts and sometimes people can’t bear it and seeing someone else overcome him-/herself and muster the willpower to turn his/her back on all excuses and rise above them, seems unachievable for them. So they consciously or unconsciously try to draw the person back to themselves. Everyone’s biggest fear is that we are not enough. Seeing someone else change for the better, while we refuse to, only increases this fear and makes us feel just that – that we are not enough.

People deny this, but we are all fond of inertness, because it creates the illusion of safety and constancy.

I remember when I first started following nutrition plans. I had to face the same challenges and many people did not accept the change. They even condemned it openly and I will not lie to you that there have been times when I felt discouraged or lonely. And yet, I had a clear idea of what I wanted and was not afraid of criticism. I asserted myself and my new identity. So in time the people who cared about me accepted the change in me and even stopped remarking on the differences between us. Nowadays I go out with many of them and I order fish and salad, while they order pizza. I don’t judge their choices and they don’t comment mine. Everyone lives according to their own beliefs and we share the things that bring us together.

3.The people around us reflect who we are; who we used to be or who we will be

Naturally, there are some people who became a part of my past. You have to understand that people don’t meet accidentally. We attract people who are at our level of mindfulness and people who are a little below and a little above our own level. The former are the ones we have to help to get to the next level, while the latter help us climb up to theirs. But there are also people who reflect who we used to be and don’t intend to change with us – with those people we already shared and exchanged what we needed and now it’s time to part – without drama. When a person changes their own self, their beliefs, their interests, it is normal for them to leave some people behind, but to make room for the new ones. Because every change leads to meeting new people who you had no idea existed, but they are so close to you and to what you need right now.

You have to realize that this stage of transition may be accompanied by some moments of doubt and sometimes of loneliness. But this should not make you quit. The world opens doors for those who know where they are going. When you don’t hesitate and assert yourself and your choices, you start living the life of your dreams.

4.We should not force our new way of life on others

You need to understand that in order for the people around you to accept your new way of life, you should not force it on them. This is the biggest mistake you can make. Every time we fall for something new, we start putting it on a pedestal and forcing it upon others. This is the most sure-fire way to get rejected and feel like we don’t have other people’s support. I have been there and I can tell you that the best way to make others believe in what you are doing and give it a try is simply to lead by example and inspire rather than reproach them.

If every time you eat your einkorn wheat pancake, you reproach your husband for having yet another sandwich for breakfast and explain to him how bad that is and that not only will he gain weight, but his health will deteriorate as well, you can expect him to… have two sandwiches the next day. But if you make an einkorn wheat pancake for him the next day and garnish it with a banana and, of course, melt some chocolate on top and offer it to him, he will probably eat it. Yes, there will be chocolate, but not much and this will still be a step in the right direction. Next time, instead of watching him buy cake for himself, you will make a cake for one, but you will make two servings and show him that healthy food does not have to be bland.

5.People have their definition of healthy upside down

And this brings us to another important fact – most people resist change, because the definition of “healthy” is upside down. To most people healthy is the equivalent of bland food, no sweets, a lot of leafy greens and no salt or olive oil on the salads. People can’t accept your change, because they have the wrong idea about it. But if you find the right approach to show them that your way of life is different, they will go from opposing the idea to supporting it.

And at the end of the day, you have to know that you are doing all this for yourselves and there will be people who will not try to understand you and will always comment your choices. This is normal. Just stop explaining yourselves to them and stop making excuses for your choices. No one needs to explain to other people every bite they take or every minute they spend at the gym, in the park or in the swimming pool.

Change of identity requires a change of environment or at least time for people to see that you are serious in your intentions and that if they want to be a part of your life, they have to stop treating you according to their memory of who you used to be and what you used to like.

Do You Crave Sweet Things? Here Is the Reason WHY!

Q&A: Everything about Lifting Weights after You Turn 40 and Getting Stronger with Bodyweight Progressions

Heal Tooth Decay: The Truth about Your Teeth