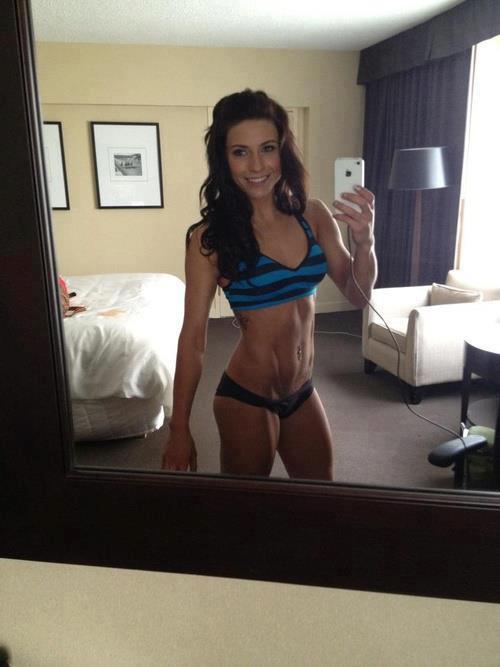 1.You have an “ideal about how you want your body to look like”, but you do everything else, besides what you need to do in order to get that body

This is a really common mistake. A lot of women look at pictures on the covers of fitness magazines and the profiles of fitness models, and they wish they looked like that! Then, they rush into doing all kind of insane diets and training programs, thinking that this way they will shape the dreamed body! And unfortunately, more often than not, these desperate tries have no success! Why?

Because your mind is a slave to the well known myths, that women are not supposed to lift weights and that a nice, fit, lean body could be achieved with a lot of starvation!

Often times, some of my friends compliment me, about what I achieved with my body during the past half an year and they say that they really wanna have defined, muscular legs as mine or get leaner! When I tell them, how I am achieving it, they start explaining me, how this formula isn’t gonna work for them and instead they turn to fruit diets and video clips( the Cindy Crawford type of videos).

Hm… it sounds really irrational to me! You want to look like a woman, who lifts weights, eats pork steaks and bacon, and in the same time you are following a philosophy, which denies weights and worships small portions, more often and if it is possible just water and lemon!

If you want to have an athletic, fit body and these words make you think of a particular image of a woman, who has already achieved this…well, you better follow her example- eat and train in a way, similar to the way she does, not the exact opposite one!

Because, as I love telling you, you should pick the advices, that you listen to, really carefully! If the achievements of that particular person, are just like the once you aim for, then listen to him/her, because his advices will probably take you there! But if your idea for success, does not resonate with his achievements, why would you trust him, just because his/ her advice fits the common, twisted perceptions and beliefs?

2.You never give enough time to a training program or a nutrition plan to actually start working

Often times, women share with me, how they’ve been eating healthy and training for a couple months, and they’ve TRIED OUT EVERYTHING, but nothings seems to help them, achieve their goals!

I know that you are impatient! I also hate being patient, but unfortunately we should! If you keep on changing your training philosophy and your nutrition plan, every day, you are hardly ever gonna get positive results!

No matter what you decide to try, just give it some time to start working!

You expect to visit the gym three times and then next week, you think you are gonna wake up with defined muscles! You think that after your fifth healthy meal, you will have less than 15% body fat! It sounds fantastic, but in reality it is just an utopia!

I remember, how a couple years ago, I was whining that the fat on my belly is melting too slow! Then a friend of mine said “Think about it! You’ve been packing this pounds for so many years! How do you expect to get rid of them in such a short time?”

3.You train just your lower body, and you don’t bother to train your upper body! ( the most you can do is swing the pink dumbbells)

This is probably due to the fact, that you really think weights have the power to make you look bulky and masculine! But as you already know, this is far from the truth! After a well shaped booty and legs, nothing looks better than muscle definition on your arms! You hate the so called bat wings, or in other words the part of our arms, hanging from your triceps, don’t you? Well, then, take the heavy weights and start training your upper body!

Back in the days, I also thought that my arms were “causa perduta” and that they will look bulky and out of shape forever… but this was just until the moment, when I decided to actually train my upper body! Nowadays I do weighted push- ups, I do pull ups, push presses with 50kg and so on, and tell you the truth, I can’t wait to see how my arms are gonna look in a couple months!

So you better leave the pink dumbbells for decoration and some color in the gym! And YOU… take the heavier dumbbells and train your upper body! This will make you look even more athletic and attractive!

I recommend you read:

I can’t wait to share with you a project I’ve been working on. It’s called IFS Journal- my FREE online magazine. Go ahead and subscribe for it HERE.

P.S. Don’t be a stranger and please take a minute to share this post with your friends! I’d greatly appreciate it!

Q&A: Everything about Lifting Weights after You Turn 40 and Getting Stronger with Bodyweight Progressions

Do You Crave Sweet Things? Here Is the Reason WHY!

A Letter to All Lazy and Gluttonous People

How to Reject Food Politely!